Lands Of The Lost

---Intro---
Created by a solo hobbyist, Lands Of The Lost is a 3D third-person Action RPG with roguelite elements. You take the role of a volunteer hero, questing to save the land from an ancient evil re-awakened.

-Action-
This is a realtime game with a heavy focus on combat. You can move and look around freely, sprint & jump & roll (with iframes) wildly with some stamina restrictions.

The player moves fast and so do the creatures, the basic melee attacks of the player and all enemies has a small chance to stun. The battles can be be a breeze or a brutal beatdown depending on how you are equipped for the area.

Creatures don't take too many hits to kill but neither will you, loot will be dropping constantly, the enemy respawn rate is high and cannot be stopped. You will have to move quickly through areas while fighting to advance.

The game uses a collision based system for combat so you will actually have to aim to hit your enemies, but you will be able to dodge their attacks as well (especially projectile attacks).

You will unlock skills that you can use along with your basic attacks in combat, you can have 3 skills at a time linked to your quickbar where you will be able to switch between them for active use. There is no doubt you'll have more skills than you can keep on the quickbar so you'll have to make good choices, though you can change them at any time.

The goal with this game was to not railroad the player and force you down a slow and inevitable path filled with forced dialogue and quests. Starting up a new game should be very fast and you'll be fighting in no time, and that theme continues throughout the game.

-RPG-
The entire combat system is based on RPG style concepts. The player and all enemies have stats like ATK (attack) and DEF (defense) or MATK (magic attack) and MDEF (magic defense). All combat is based on these stats, which you can raise directly with each level-up.

You will find that most gear will raise these stats as well further increasing your damage. The various weapons you will be able to purchase of increasing power will mostly just be boost to these stats, however weapons also set the damage type for your basic attack to either physical (scales with ATK) or magic (scales with MATK). Not only do basic attacks scale with these stats but you will see that the attack skills you can unlock in the skill tree as you level up will scale in the same way. These skills use mana but that will regenerate with time like your health, also there are potions. You'll also find armor to boost the defensive stats. Additionally you can get 'buff' skills that will raise certain stats for a period of time before wearing off.

In addition you will find consumable potions to restore your health & mana, as well as random drops from enemies that are crafting items that can be brought to a village where the crafting NPC can turn it into goods for you. In town you will also be able to pick up quests to complete for rewards, or to buy/sell new weapons & armor & magic rings or even just more potions (including permanent stat boosting ones). The towns also have many NPCs that provide some backstory and lore to the game.

-Roguelite-
This game embraces the concept of permanent death. There is no saving or loading. There are no checkpoints. When you die your character and all progress will be lost and you will have to start a new one. Even when you win your character will be removed to 'retire' and your Total Wins will increase by +1.

To make this work the game is not very long (2 hours or so to get a victory) and it also heavily uses randomization in the world creation - so you get a fresh game world with every new run. This keeps the game from getting too stale hopefully and also makes the loss of death less painful. However the high difficulty will keep racking up wins from being too easy if all goes to plan.

Additionally there is permanent progression to encourage replays as well. Each time you beat the final boss and win the game your Total Wins will increase and this will unlock new character types for you to select at the new game screen. Each character has a unique skill tree and will play differently.

-World-
The game takes place in a total of 4 worlds - each with an outdoor area, dungeon and town.

Each new outdoor area and dungeon will have more difficult enemies. Each new town will have better weapons/armor/accessories and better potions to buy and better things to craft, as well as unique quests for that area.

You will have to defeat the boss of each dungeon to unlock the path to the next world, defeating the final dungeon boss will win you the game.

-Accessibility-
This game has an option at the main menu screen to toggle on mouse inversion - thus you are able to play either inverted or non-inverted with the mouselook in game.

Extensive effort went into supporting many different resolution / aspect ratios. You will see at the initial launcher screen that you can select just about any resolution that your monitor supports. This game should work on any square or landscape screen, but will not work on portrait (vertical) displays. The following aspect ratios were specifically tested - 1:1, 5:4, 4:3, 3:2, 16:10, 5:3, 17:10, 16:9, 18:9, 21:9

There is a hotkey guide that can be viewed at the main menu but also optionally overlayed during gameplay using the 'H' key to toggle it on/off. This can be a handy rereference if you forgot how to access any of the GUI screens.

There is a minimap that provides details to keep the player oriented at all times not only in the zone they are in but hopefully giving them an idea of their progression through the zones.

The game should be able to support an very wide range of machines using the Quality options in the launcher, the Low setting should run on just about anything and the High setting should hopefully look good on powerful rigs. 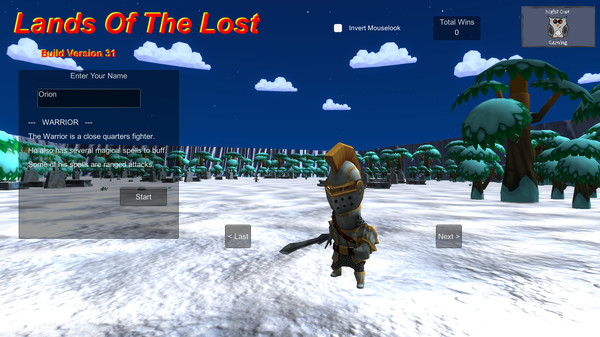 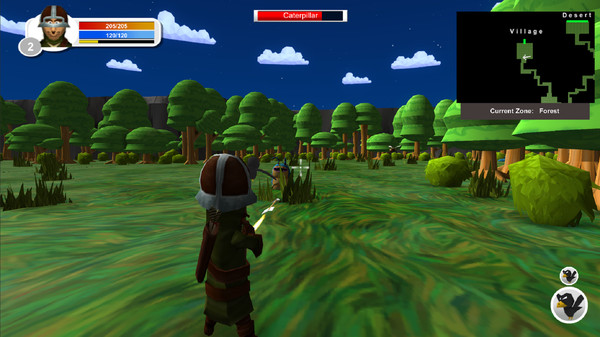 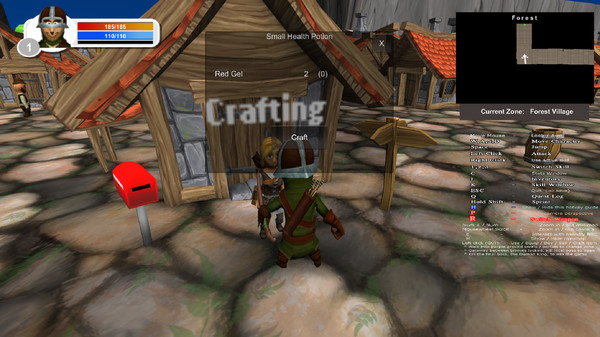 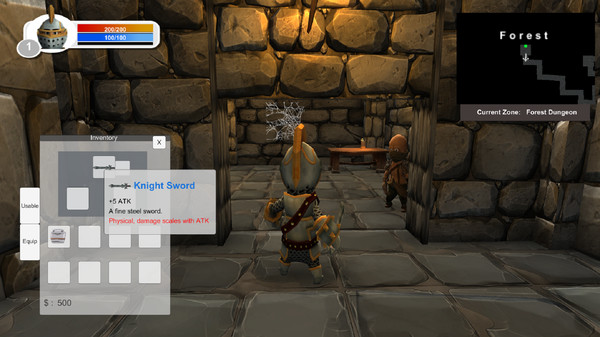 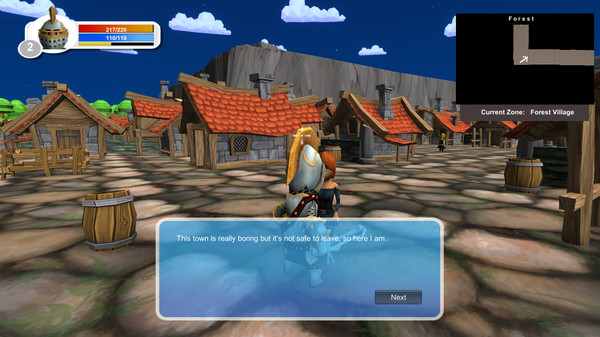 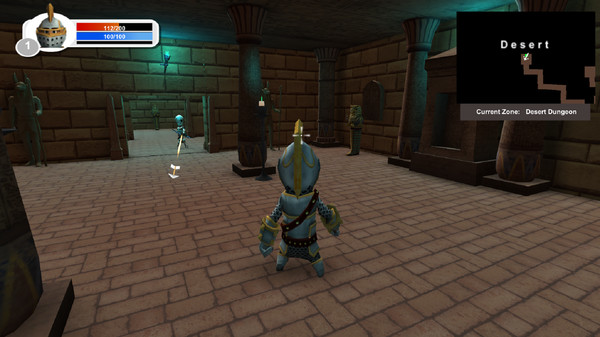 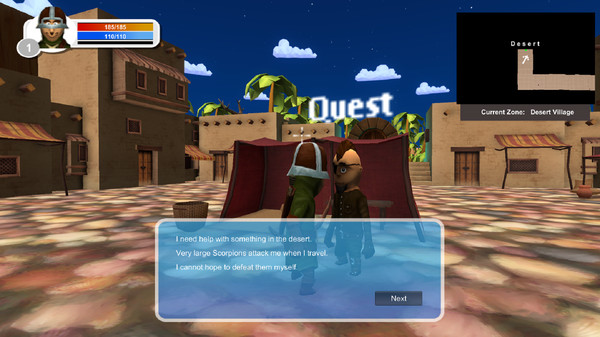 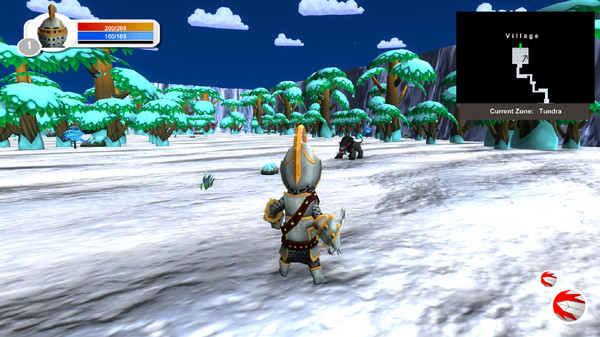 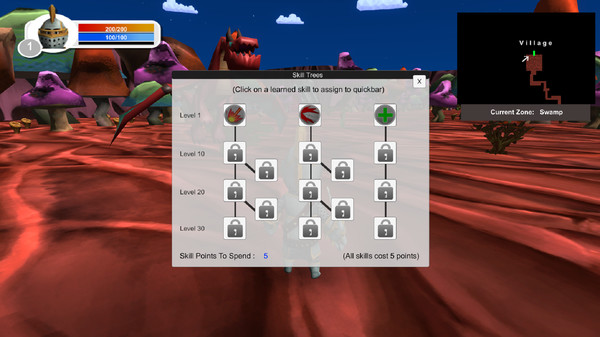 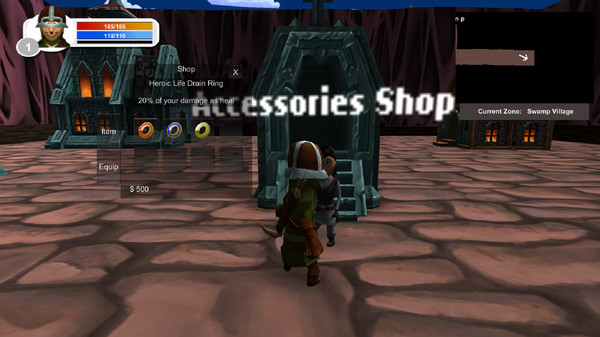